The Vatican remembers the 800th anniversary of Pope Innocent III 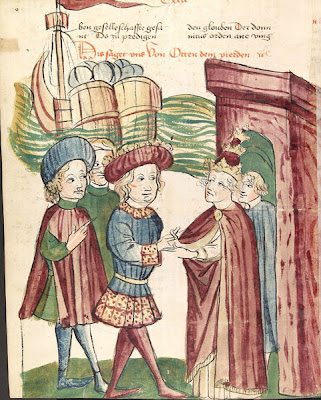 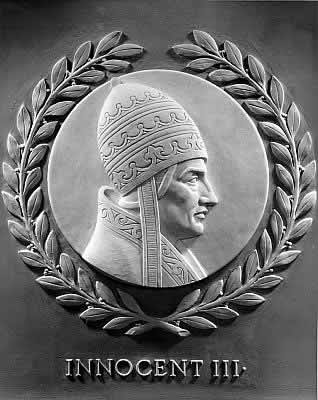 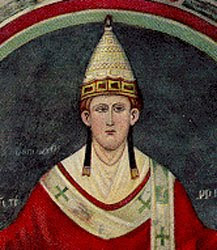 Otto's election pulled the empire into the conflict between England and France, since Philip allied himself with France, and Otto was being supported by England. In 1200-01, Innocent announced that he recognized Otto as the only legitimate king. In return, Otto promised to support the pope's interests in Italy. In the following years, Otto's situation worsened because after England's defeat by France he lost England's financial support. Many of his allies changed sides to Philip, including his brother Henry. Otto was defeated and wounded in battle by Philip on July 27, 1206, near Wassenberg, and as a consequence also lost the support of the pope. Otto was forced to retire to his possessions near Braunschweig.

However, Philip was murdered two years later, on June 8, 1208. After Philip's death, Otto made amends with the Staufen party and became engaged to Philip's daughter Beatrix. In an election in Frankfurt on November 11, 1208, he gained the support of all the electoral princes. He was crowned emperor by Pope Innocent on October 4, 1209.

Contradicting his earlier promises, Otto worked to restore imperial power in Italy and was excommunicated by the pope for this in 1210.


When Innocent III became Pope in 1198, he succeeded his uncle Pope Celestine III. Like his predecessors, Innocent demonstrated an immediate desire to regain the Holy Land and worked for the launching of another crusade during the first year of his reign. His efforts ultimately proved successful when a crusader army began to assemble in Venice in 1202. They intended to set out for the Holy Land on ships, by way of Egypt, on what would become known as the Fourth Crusade. Although Innocent initially hoped to maintain control over the crusaders, his hopes were quickly dashed.

Financial problems led the crusaders astray from their original goal of Egypt and resulted in the notorious conquest of the Catholic city of Zara in 1203 and the even more shocking conquest of the Orthodox Christian city of Constantinople in 1204. The crusader never made it to Egypt nor did battle with Muslims, only other Christians. Innocent III was furious upon hearing of the conquest of both cities, and at one point excommunicated the crusaders, but he then made the best of the situation and worked to strengthen Latin rule in Constantinople.

Throughout his reign Innocent III also paid careful attention to events in the south of France, mainly in the region of Languedoc. Since at least the middle of the twelfth-century, preachers, including the reknown St. Bernard of Clairvaux, had been going there to combat the Cathar heresy. In 1208, after the murder of the Papal Legate Pierre of Castelnau, Innocent III proclaimed what became known as the Albigensian crusade. The goal of the crusade was to take control of the region from rebellious Catholic nobility and to enforce Catholic orthodoxy on their Cathar subjects. Ultimately, from Innocent's point of view, the crusade must be deemed a success as most of the region was brought under the control of the King of France over the next twenty years. A few Cathar outposts remained as late as 1255 when Queribus, the last of the Cathar castles, fell to French knights.

As the Fourth Crusade never reached its goal of reconquering Jerusalem in 1204, this issue continued to linger as a major concern for Innocent throughout his papacy. As a result, in 1215 at the Fourth Lateran Council, he called for another crusade, later known as the Fifth Crusade, to win back the Holy City and other areas lost to the forces of Islam. Innocent did not live long enough to see the successful launching of the Fifth Crusade, as he died in 1216 and the first expeditions of the crusaders did not embark until 1217. Pope Honorius III continued Innocent's prepatory efforts and the crusaders had some success in the conquest of Damietta under forces led by Cardinal Pelagius, but nothing else of significance was accomplished.

Pope Innocent III also took a keen interest in crusading efforts in Spain and lived to hear of the decisive victory of Christians over Muslims at the Battle of Las Navas de Tolosa in 1212.

Throughout his long and influencial career Innocent never hesitated to use Christian force, but only when he believed diplomacy had been exhausted. Innocent's abilities as a diplomat were second to none as was often demonstrated by his ability to accomplish his goals through forceful negotiation with various rulers in Christendom. He often effectively resorted to excommunication, or the threat of excommication, as a means of adding force to his demands of secular rulers. When such threats were uneffective, the Pope demonstrated an excellent ability for alliance building, whether politically or militarily, to thwart the various efforts of his enemies. As might seem fitting in light of his efforts while he lived, Pope Innocent III died on June 16, 1216 at Perugia while traveling through Italy promoting the Fifth Crusade. Thus he both began and ended his eighteen year papacy seeking crusades to the Holy Land.

Feudal power over Europe
During the reign of Pope Innocent III, the papacy was at the height of its powers. He was considered to be the most powerful person in Europe at the time.[7] His papacy asserted the absolute spiritual authority of his office, while still respecting the temporal authority of Kings.

Philip II became Innocent III's ally in the struggle over Otto IV. Innocent stated that he had no intention of encroaching upon the rights of the princes, but insisted upon the rights of the Church in this matter. He emphasized especially that the conferring of the imperial crown belonged to the pope alone. In 1201 the pope openly espoused the side of Otto IV. On 3 July 1201, the papal legate, Cardinal-Bishop Guido of Palestrina, announced to the people, in the cathedral of Cologne, that Otto IV had been approved by the pope as Roman king and threatened with excommunication all those who refused to acknowledge him. Innocent III made clear to the German princes by the Decree "Venerabilem" which he addressed to the Duke of Zähringen in May 1202, in what relation he considered the empire to stand to the papacy. This decree, which has become famous, was afterwards embodied in the "Corpus Juris Canonici".

Here are some highlighted points from the decree: The German princes have the right to elect the king, who is afterwards to become emperor.

In case of a double election the pope must exhort the princes to come to an agreement. If after a due interval they have not reached an agreement they must ask the pope to arbitrate, failing which, he must of his own accord and by virtue of his office decide in favour of one of the claimants. The pope's decision need not be based on the greater or less legality of either election, but on the qualifications of the claimants.

Otto allied himself with England (he was the nephew of King John) to fight Philip II Augustus, but he was defeated in the Battle of Bouvines in what is now Belgium, on July 27, 1214. Thereafter Otto IV lost all influence and died on May 19, 1218, leaving Frederick II the undisputed emperor. King John was forced to acknowledge the Pope as his feudal lord and accept Stephan Langton as Archbishop of Canterbury.

Innocent called the Fourth Crusade, which was diverted to Constantinople. The pope excommunicated the Crusaders who attacked Christian cities, but he made no move to halt or overturn their actions because he felt, erroneously, that the Latin presence would bring about a reconciliation between the Eastern and Western Churches. Innocent also ordered a crusade against the Albigenses, which successfully subdued the Cathar heresy in France but at a great cost in life and blood.
Posted by MattHistoryPerson at 10:13 AM