20 years ago the world lost a great composer, Leonard Bernstein 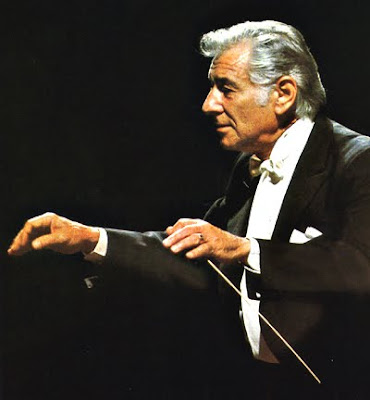 Leonard Bernstein: a truly unqiue man who composed some wonderful music!remembering you after 20 years, may you rest in peace! 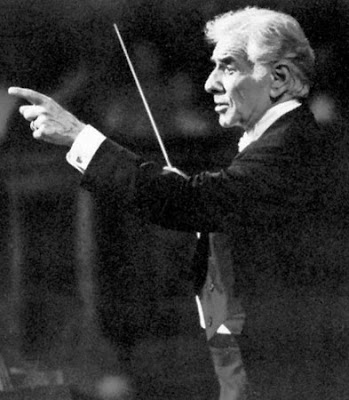 Leonard Bernstein August 25, 1918 – October 14, 1990) was an American conductor, composer, author, music lecturer and pianist. He was among the first conductors born and educated in the United States of America to receive worldwide acclaim. He was probably best known to the public as the longtime music director of the New York Philharmonic, for conducting concerts by many of the world's leading orchestras, and for writing the music for West Side Story, Candide, Wonderful Town, and On the Town. Bernstein was the first classical music conductor to make numerous television appearances between 1954 and 1989. He had a formidable piano technique[2] and as a composer also wrote symphonies and other concert music. According to The New York Times, he was "one of the most prodigiously talented and successful musicians in American history.

On PBS in the 1980s, he was the conductor and commentator for a special series on Beethoven's music, which featured the Vienna Philharmonic playing all nine Beethoven symphonies, several of his overtures, one of the string quartets arranged for the full string section of the Vienna Philharmonic, and the Missa Solemnis. Actor Maximilian Schell was also featured on the program, reading from Beethoven's letters. This series has since been released on DVD.

In 1982, he and Ernest Fleischmann founded the Los Angeles Philharmonic Institute, where he served as Artistic Director through 1984.

Leonard Bernstein was a regular guest conductor of The Royal Concertgebouw Orchestra in Amsterdam. In the 1980s, he recorded, among other pieces, Mahler's First, Second, Fourth, and Ninth Symphonies with them.

In 1985, he conducted a complete recording of his score for West Side Story for the first and only time. The recording, much criticized for featuring what critics felt were miscast opera singers such as Kiri Te Kanawa, José Carreras, and Tatiana Troyanos in the leading roles, was nevertheless a national bestseller.

In 1989, Bernstein again conducted and recorded another complete performance of one of his musicals, again featuring opera singers rather than Broadway stars. This time it was Candide, and because the show was always intended to be an operetta, the recording made from it was much more warmly received. The performance was released posthumously on CD (in 1991). It starred Jerry Hadley, June Anderson, Adolph Green, and Christa Ludwig in the leading roles. The Candide recording, unlike the West Side Story one, included previously discarded numbers from the show.


Bernstein's grave in Green-Wood CemeteryA TV documentary of the West Side Story recording sessions was made in 1985, and the Candide recording was made live, in concert. This concert was eventually telecast posthumously.

On Christmas Day, December 25, 1989, Bernstein conducted Beethoven's Symphony No. 9 in East Berlin's Schauspielhaus (Playhouse) as part of a celebration of the fall of the Berlin Wall. The concert was broadcast live in more than twenty countries to an estimated audience of 100 million people. For the occasion, Bernstein reworded Friedrich Schiller's text of the Ode to Joy, substituting the word Freiheit (freedom) for Freude (joy).

Bernstein, in the introduction to the program, said that they had "taken the liberty" of doing this because of a "most likely phony" story, apparently believed in some quarters, that Schiller wrote an "Ode to Freedom" that is now presumed lost. Bernstein's comment was, "I'm sure that Beethoven would have given us his blessing."

He suffered a coughing fit in the middle of the Beethoven performance which almost caused the concert to break down. The concert was later issued on CD by Deutsche Grammophon.

He died of pneumonia and a pleural tumor just five days after retiring.[3] A longtime heavy smoker, he had battled emphysema from his mid-50s. On the day of his funeral procession through the streets of Manhattan, construction workers removed their hats and waved, yelling "Goodbye, Lenny."[26] Bernstein is buried in Green-Wood Cemetery, Brooklyn, New York.

Influence
Bernstein was highly regarded as a conductor among many musicians, including the members of the Vienna Philharmonic Orchestra, evidenced by his honorary membership; the London Symphony Orchestra, of which he was President; and the Israel Philharmonic Orchestra, with which he appeared regularly as guest conductor. He was considered especially accomplished with the works of Gustav Mahler; with his own compositions; and with American composers Aaron Copland, Charles Ives, William Schuman, and George Gershwin. His recordings of Rhapsody in Blue (full-orchestra version) and An American in Paris with the Philharmonic, released in 1959, are considered definitive by many, although for reasons unknown Bernstein always cut the Rhapsody slightly.

Unfortunately, he never conducted a performance of Gershwin's Piano Concerto in F, nor did he ever conduct Porgy and Bess. However, he did discuss Porgy in his article, Why Don't You Run Upstairs and Write a Nice Gershwin Tune?, originally published in The New York Times and later reprinted in his 1959 book The Joy of Music.

He had a gift for rehearsing an entire Mahler symphony by acting out every phrase for the orchestra to convey the precise meaning and by emitting a vocal manifestation of the effect required.

Bernstein had a notably exuberant conducting style. He strayed far from classic conducting techniques, using his whole body to coax the best out of his orchestra, and had evident fun doing so.

Bernstein influenced many conductors who are performing now, such as Marin Alsop, Alexander Frey, John Mauceri, Seiji Ozawa, Carl St.Clair, and Michael Tilson Thomas. Ozawa made his first network television debut as the guest conductor on one of the Young People's Concerts.

"Leonard Bernstein" is famously one of the only lines of the verses of R.E.M.'s single It's The End Of The World As We Know It (And I Feel Fine) which can easily be heard.

Posted by MattHistoryPerson at 7:28 PM