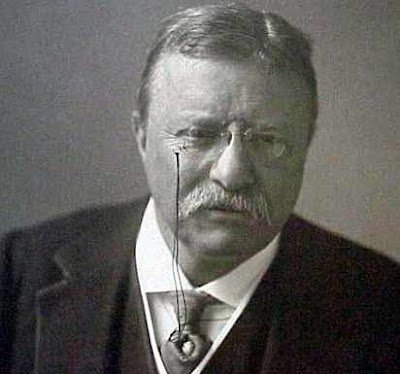 Theodore Roosevelt: to one of my favorite presidents throughout the history of the Presidency, TR are truly a unqiue guy! Also helping out with the National Park Service also, Remembering you today, happy 152nd birthday!

Theodore "Teddy" Roosevelt: October 27, 1858 – January 6, 1919) was the 26th President of the United States. He is noted for his energetic personality, range of interests and achievements, leadership of the Progressive Movement, and his "cowboy" image and robust masculinity.

He was a leader of the Republican Party and founder of the short-lived Progressive ("Bull Moose") Party of 1912. Before becoming President (1901–1909) he held offices at the municipal, state, and federal level of government. Roosevelt's achievements as a naturalist, explorer, hunter, author, and soldier are as much a part of his fame as any office he held as a politician.

Born to a wealthy family, Roosevelt was an unhealthy child suffering from asthma who stayed at home studying natural history. In response to his physical weakness, he embraced a strenuous life. He was home schooled and became a passionate student of nature. He attended Harvard, where he boxed and developed an interest in naval affairs. In 1881, one year out of Harvard, he was elected to the state legislature as its youngest member. Roosevelt's first historical book, The Naval War of 1812, published in 1882, established his professional reputation as a serious historian. After a few years of living in the Badlands, Roosevelt returned to New York City, where he gained fame for fighting police corruption.

While effectively running the Department of the Navy, Spanish American War broke out from which he resigned and led a small regiment in Cuba known as the Rough Riders, earning himself a nomination for the Medal of Honor (which was received posthumously on his behalf on January 16, 2001). After the war, he returned to New York and was elected governor in a close fought election. Within two years later he was elected Vice President of the United States.

In 1901, President William McKinley was assassinated, and Roosevelt became president at the age of 42, taking office at the youngest age of any U.S. President in history. Roosevelt attempted to move the Republican Party in the direction of Progressivism, including trust busting and increased regulation of businesses. Roosevelt coined the phrase "Square Deal" to describe his domestic agenda, emphasizing that the average citizen would get a fair shake under his policies. As an outdoorsman and naturalist, he promoted the conservation movement. On the world stage, Roosevelt's policies were characterized by his slogan, "Speak softly and carry a big stick".

Roosevelt declined to run for re-election in 1908. After leaving office, he embarked on a safari to Africa and a tour of Europe. On his return to the US, a bitter rift developed between Roosevelt and his anointed successor as President, William Howard Taft. Roosevelt attempted in 1912 to wrest the Republican nomination from Taft, and when he failed, he launched the Bull Moose Party. In the election, Roosevelt became the only third party candidate to come in second place, beating Taft but losing to Woodrow Wilson. After the election, Roosevelt embarked on a major expedition to South America; the river on which he traveled now bears his name. He contracted malaria on the trip, which damaged his health, and he died a few years later, at the age of 60. Roosevelt has consistently been ranked by scholars as one of the greatest U.S. Presidents.
Posted by MattHistoryPerson at 6:48 PM