Tomorrow would have been John Lennon's 70th birthday! 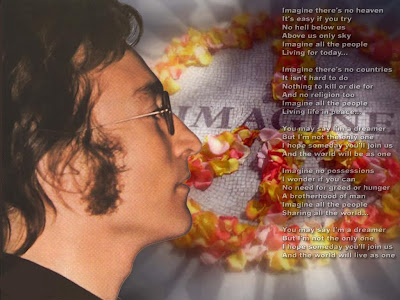 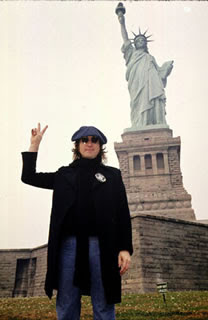 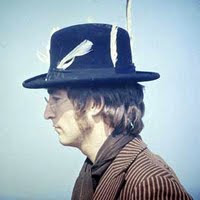 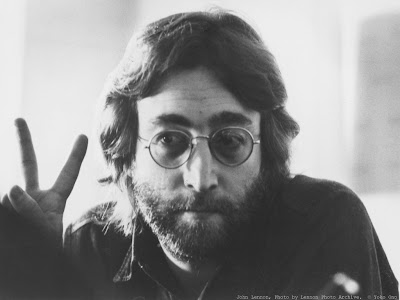 HAPPY 70th BIRTHDAY JOHN, YOU ARE GREATLY MISSED!! THANK YOU FOR ALL YOUR MUSIC AND ENTERTAINMENT YOU GAVE US!!
- MFPS

Beatle, Rock Musician. Born John Winston Lennon in Liverpool, UK to merchant seaman Alfred and Julia Stanley Lennon. His parents separated when he was four, and Julia put John in the care of her sister, Mary Smith whom he called Mimi. Although Julia never lived more than 10 miles from him, he would only see her occasionally. As a teenager, he became caught up in the skiffle craze that was sweeping England at that time, and formed a skiffle band he called The Blackjacks, who later became The Quarry Men. It was at a Quarry Men gig in July in 1957 (Woolton Fete) that he was introduced to Paul McCartney. Neither one was initially impressed with the other, until John learned that Paul could actually tune a guitar. A few weeks later, Paul joined The Quarry Men. That same year, John attended the Liverpool College of Art, where he would meet future wife Cynthia Powell along with future band mate Stuart Sutcliffe. Soon after Paul joined the band, he introduced John to a younger schoolmate, George Harrison. John accepted George into the band in 1958. The Quarry Men went through numerous line-up changes as well as name changes in 1959 and 1960. Among those were Johnny and The Moondogs, The Silver Beetles, until finally settling on The Beatles about 1960.

They traveled to Hamburg, Germany's seedy Reperbaun district as a house band at the Indra and Kaiserkeller clubs in grueling 7 to 8 hour sets. The band was eventually forced to leave Hamburg when it was discovered George was underage. Back in Liverpool by early 1961, The Beatles were playing lunch-time sessions at The Cavern Club in Liverpool. It was at the Cavern in November 1961 that Brian Epstein saw the group perform. Epstein took the mantle of manager and set about sharpening their image He secured an audition with Decca Records in London in 1962. They were finally picked up at Parlophone Records. Drummer Pete Best was replaced with Ringo Starr before their first recording sessions. Their first single, "Love Me Do," reached the top twenty in late 1962 on the British charts; "Please Please Me" in 1963 hit #1.

The Beatles would have 11 consecutive number ones on the British charts from 1963 to 1966. American TV host Ed Sullivan witnessed "Beatlemania" in London's Heathrow Airport and he booked The Beatles to be on his show, "The Ed Sullivan Show" in February 1964. Their performance on the Sullivan show two days later remains one of the most watched shows in television history, with a viewing audience of 73 million people. The Beatles had the Top 5 positions on Billboard magazine's Hot 100 Singles chart for the week of April 4, 1964, in addition to seven other singles, for a total of 12.

The Beatles broke new musical ground with such albums as 1965's "Rubber Soul", and two years later with "Sgt. Pepper's Lonely Hearts Club Band," which hit number one. John's single, "All You Need Is Love," debuted on the first global satellite TV program, "Our World," in 1967, where The Beatles were chosen to represent England. Their last concert was held on August 29, 1966 in San Francisco's Candlestick Park. The Beatles started to disintegrate during the sessions for the so-called "White Album" in 1968. At various points, John, George, and Ringo quit the band. At one point, John became so disgusted, he stated he "wanted a divorce" from The Beatles.

John's met Japanese-born Yoko Ono in 1966 at the Indica Gallery in London, while each was married to other people. John and Yoko made their relationship public in 1968. Yoko became John's focal point, going so far as to include her in Beatles studio recordings. They also embarked on various recording and media stunts that included appearing in white bags in public. John and Yoko married on March 20, 1969 at the British Consulate in Gibraltar and spent their honeymoon in bed for the now legendary "bed-in for peace" at the Amsterdam Hilton in The Netherlands. In April of 1969, John changed his middle name to Ono.

In November of that year, John returned his MBE (Member of the British Empire) medal, awarded in 1966, to protest British government policy against Nigeria, the Viet Nam War, and the poor chart performance of his latest single. After settling in Hew York, he released successful solo albums such as "Imagine" in 1971 and "Mind Games" in 1973. John faced deportation proceedings in March 1972, when his visa expired and he was told to leave the country due to his 1968 British drug conviction. During his fight, many people lined up in support of John, including New York mayor John Lindsay.

From 1972 until two days before his second son's birth in 1975, John faced a few deportation threats, but on October 7, 1975 the New York State Senate reversed the deportation order and John received his Green Card in July of 1976. John returned to recording in 1980 with his first solo album in over half a decade, "Double Fantasy." On the night of December 8, 1980, John was in the walkway of The Dakota apartment building in New York City when someone said, "Mr. Lennon." John turned around and was shot at close range by a stalker. Rushed to the Emergency Room of nearby Roosevelt Hospital he was declared dead on arrival. Posthumously, "Double Fantasy" won the Grammy for Album of the Year in 1982.

In 1988, he received a star on the Hollywood Walk of Fame, in addition to being inducted into the Rock and Roll Hall of Fame as a member of The Beatles, and was inducted into the Hall of Fame in 1994 as a solo artist. He received a posthumous Lifetime Achievement Award Grammy in 1991. Two of his demo tapes, "Free As a Bird" and "Real Love" were released to the three surviving Beatles to finish in the early 1990s. Other works include the poetry collections, "In His Own Write" (1964) and "A Spaniard In the Works" (1965).

Burial:
Cremated, Ashes given to family or friend.


IMAGINE LYRICS
Imagine there's no heaven
It's easy if you try
No hell below us
Above us only sky
Imagine all the people
Living for today...

Imagine there's no countries
It isn't hard to do
Nothing to kill or die for
And no religion too
Imagine all the people
Living life in peace...

Imagine no possessions
I wonder if you can
No need for greed or hunger
A brotherhood of man
Imagine all the people
Sharing all the world...

You may say I'm a dreamer
But I'm not the only one
I hope someday you'll join us
And the world will live as one
Posted by MattHistoryPerson at 8:30 PM